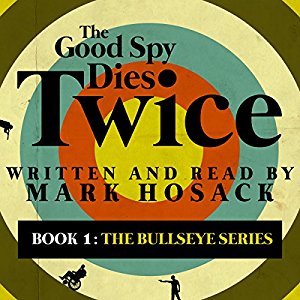 Jake Boxer, investigative journalist and host of the conspiratorial news show Bullseye, is in serious trouble. Not only is his soundman murdered by Russian intelligence agents while reporting on a secretive New World Order, but his network cancels his show, leaving Jake humiliated and spiraling into a deep dark depression.

Years later, a condemned murderer, who claims he was abandoned by the CIA, and who starred in an early episode of Bullseye, is finally executed for killing two supposed Soviet spies back in the 1970’s.

Jake Boxer, still trying to piece his life back together, is on his honeymoon in a posh ski resort in the Alaskan mountains when he gets word of the inmate’s execution . . . and the old killer’s final words: “The good spy dies twice.”

Those five words, seemingly meant for Jake, draw the ex-reporter from his forced retirement and into a complex and deadly global conspiracy involving his newlywed wife, the secretive New World Order, and the hotel’s hundred or so “guests.”

Everyone is a suspect.

Limited time only: Get the ebook at a special price and add the audiobook for just $1.99 on Amazon

Mark Hosack is the author of THE GOOD SPY DIES TWICE (Book 1: The Bullseye Series, nominated for the 2016 RT Source Award), and IDENTITY (Simon & Schuster). He also wrote on the web series SEQUESTERED for Sony Crackle, the screenplay for GIVE ‘EM HELL, MALONE (Thomas Jane, Ving Rhames), and he both wrote and directed the award winning independent film PALE BLUE MOON. Mark lives in Los Angeles with his wife and a brood of gremlins who insist on calling him Dad.

I received this audiobook as part of my participation in a blog tour with Audiobookworm Promotions. The tour is being sponsored by Mark Hosack. The gifting of this audiobook did not affect my opinion of it.

Jack Boxer is recovering from a nervous break down after being publicly humiliated during the last episode of this TV show Bullseye. In that episode Jack mentioned a Russian conspiracy related to the New World Order to be behind the death of his soundman during a trip to Russia in which he was expected to record a mysterious hum. Years later, Jack still with no future prospects, marries Claire, a travel journalist, and they decide to spend their honeymoon in a small resort in Alaska, where she is supposed to write an article about extreme honeymoons. Things seem to get complicated when the old conspiracy resurfaces and Claire seems to be secretly investigating it.

‘The Good Spy Dies Twice’ is a thriller in which the Cold War is still a reality, where everyone is not what they seem, and where even your wife is holding secrets from you. It is a 10+ hours book but it caught my attention from the start. The mystery, the intrigue, kept me listening without being able to stop. It is also a psychological thirller in which sometimes we do not know whether Jack is right or he is losing his mind. Jack is a broken man, and his thoughts and conspiracy teories will keep us on edge, trying to discern whether there is a real danger and whether it is related to the death of his soundman.

I was at first quite annoyed at Claire’s behavior, as I suppose Jake was feeling, but it all made sense afterwards. I would like to point out that the intrigue was wonderfully built and executed, but not all the questions were answered. It could be that some were left for future books (I hope so).

The book is narrated by Mark Hosack himself. I have to say that I am pleasantly surprised at how well he narrated this book, even though this seems to be his first narrating job. He transmitted all the emotions of the characters and did a wonderful performance.

After having finished this book Hosack has left me hungry for more. His writing style coupled with his narrating skills made this book irresistible.

May 1: The Desert Bibliophile

May 3: The Book Addict’s Reviews